Cookies help us deliver our services. By using our services, you agree to our use of cookies. More information

From Lost Games Wiki
Jump to navigationJump to search

Earth Bound is the planned English localization of Mother, an RPG for the Famicom about Ninten, a young boy with psychic powers, in his quest to save Earth from alien invasion. A prototype of the English version was put up for sale on the newsgroup rec.video.games.classic,[2] and ended up being purchased for $125. Steve Demeter, the leader of the fan translation group Demiforce, was working on an English translation of Mother. Upon hearing of the auction, Demeter attempted to locate the current owner of the cartridge. This proved to be a difficult task, as Greg Mariotti, the original seller, refused to give any information about the buyer.

Eventually, another fan of the Mother series contacted Demeter and informed him that the current owner of the cartridge was Kenny Brooks, a game collector. Demiforce then contacted him and attempted to negotiate for the game's ROM to be released to the public. An agreement was reached to pay Brooks $400 in two installments ($200 up front, then $200 following a successful backup of the game data). An internet donation drive was started to help fund this project.

The $400 was quickly gathered, and the cartridge was recieved by Demiforce. After the game was successfully backed up, it was discovered that it wouldn't run on Nesticle, the most popular NES emulator at the time. The game froze whenever a text box appeared on screen. One programmer, TrelaneQ, discovered that modifying a single byte of the game's code would fix that problem. Now that the game was playable, Demiforce modified the title screen to say Earthbound Zero, to distinguish it from EarthBound (also known as Mother 2), the sequel on the SNES. 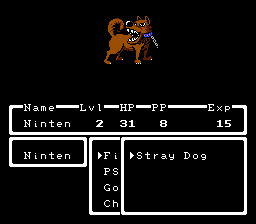 The ROM was released to the public on April 27, 1998. Almost immediately after the ROM's public release, it was discovered that the game was unplayable; at random points in the game, it would cut to a black screen informing the player that they're playing an illegal copy. It turned out that modifying a byte earlier triggered a checksum copy protection routine later in the code. TrelaneQ teamed up with another programmer, Barubary, and they quickly figured out how to disable the copy protection, and released a new version of the ROM.

Earth Bound has many differences from Mother, most notably involving censorship, including several enemies' sprites being modified to be less gruesome, crosses being removed from gravestones, and removal of tobacco products.[3]

Despite evidence suggesting otherwise, some believe that the Earth Bound prototype cartridge is a hoax created by Demiforce, citing inconsistencies on the label (such as a 1994 date when the game was planned to be released in 1991). However, in 2003, Mother 1+2 was released, and included a version of Mother with similar differences to the original as the Earth Bound prototype.

On June 14, 2015, the Earth Bound prototype was officially released overseas on Virtual Console, under the name EarthBound Beginnings.